I wanted to share something sweet and romantic today. I am a romance writer, after all!  Below is the speech my daughter gave at my wedding a year and a half ago, after having been with Will for about sixteen years. It’s one of the most lovely things that has ever been written about any part of my life and I cherish it.

When I met Will I was already married and still IN my marriage. There is a lot of complicated stuff in there and a tale of accidental polyamory that is relevant to this, but not so much that I need to get into all of those details today, here. Mostly, I wanted to share this lovely toast with you. We didn’t get a recording of it, but I can tell you that everybody there was moved by Jade’s toast and I’m finally putting it out there for you all to enjoy.

Jade was given a LOT of wedding responsibility, that she handled like a champ. Here you can see the migraine Jade is about to have start to take hold. She held out until after the speech then got a very bad migraine, bless her!

My mom brought Will home for the first time when I was 8 years old. I remember her sitting me down and telling me about how he was going to be around a bit, and though it was kind of complicated, not to worry about it.  I didn’t know what to think, or how to explain it to my friends, or what was going to happen – but i knew I wasn’t worried. I think even part of my little 8 year old subconscious recognized the spark of something I’d never truly seen in my mother: happiness.

So he stayed around.  I grew up as they grew together. I don’t remember too much about those formative years in their relationship, but I do remember Will coming into mine.  Without too much fuss, he became a part of the family and the routine; he would wake me up for school and make me breakfast while I passed back out on the couch (something that my boyfriend will tell you is not too different from what he does for me now.)  He came to the school plays and recitals, we would go on Saturday day trips together, and soon it was all just part of life.  His family became our family; his wins became our wins; his losses became our losses; and ours his.

Life happened. Hardships and complications and hurdles happened; and I watched them, every time, look each other in the eyes and choose to choose each other, and then look forward into navigating whatever made the seas heavy that time.  I watched them learn how to be together, and look at every situation – eventually – as not a problem, but a challenge; an opportunity to learn more about how to best love the other person.  Soon, they became my template for what a loving relationship should look like; what compromise means, what humble means, what grace means.

And for my part, I have always felt very grateful and lucky that Will came into my life – and I know my co-maidens feel the same. I so appreciate the fact that, though my mom had so many logistical reasons that she could have just kept her life moving in the direction it was, she had the courage to climb on board and redirect the sails, and start moving into the winds, even if it was going to be hard.  And she ended up taking us with her, and I will always be grateful she did.

Will has been nothing but a supportive, loving presence in my life; he still comes to all the school plays; he still brings me breakfast when I pass out on their couch.  Even when he is tired and even when he is upset, he is a constant, positive beam of moonlight in every life he touches, always with a poetic word and an ear to listen.  When my father kind of disappeared into his other life, Will seamlessly stepped in – not taking up the space, but in fact stretching it to fill the gaps where I needed somebody.  In all of the kerfuffle of this lifetime they’ve lead together, never once did I feel a lacking.

And my mother is different too, from the mother I had in my younger years.  She is more fulfilled, more unafraid, and more open (as if anyone thought that was possible.)  She has learned how to love herself by loving Will, and by proxy learned how to love the people around her better.  She found herself in finding him, and I don’t know where she would be if she hadn’t, but I wouldn’t want to find out. 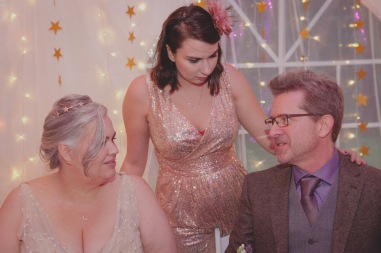 Most people don’t get to watch their parents find their people.  They weren’t born yet, or it’s hidden from them, or it’s after they moved out, or whatever the reason. But I did.  I got to watch my mom make the journey, make the choices, and come out of the other side the person she was supposed to be as opposed to the person she was trying to make herself become.  I watched them become a them, and I watched them refine it, and I continue to watch them work and love and compromise and sail.

So, a toast, to Heather and Will; The ship that will always sail through heavy seas.